the douglas dakota is an airplane that is well known in switzerland due to a plane that crash-landed onto gauli glacier in the bernese oberland in 1946. to this day remains of the airplane are occasionally recovered from the glacier. some of them are on display in innertkirchen.
the dakota existed in several variants (c-47, c-53). it is the military version of the civilian dc-3. the design is somewhat simple but beautiful.

i wanted to model an rc plane that can be 3d printed in several pieces and that would require only a minimum of manual work, i.e. it should be sort of print-glue-plug-n-fly. since i like the design of the dakota the choice was an easy one.

to accurately model this airplane with a cad system is very time-consuming. therefore i did not aim for an accurate scale model, it just had to look similar and be 3d printable. the design is such that all pieces of the airplane fit onto the build plate of my fdm printer. they also require minimal support and the wings (except for the wing tips) can be printed in a way that gives them maximum bending strength.

the stl files of the model can be downloaded from thingiverse. there you can also find additional information.

the parts should be printed with only one shell and minimal infill in order to keep the take off weight low. i used pla to print all components because it is all i had available and because it is very easy to print with. but it is not a great choice for a light weight model since the density of the material is around 1.25 g/cm^3. so you better print everything in abs or asa. asa might be the better choice due to its lower shrinkage. 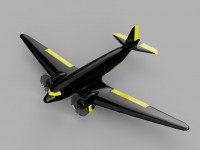 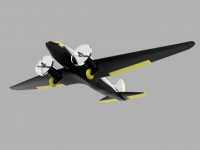 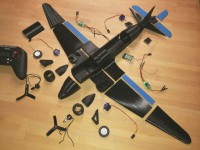 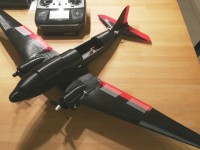